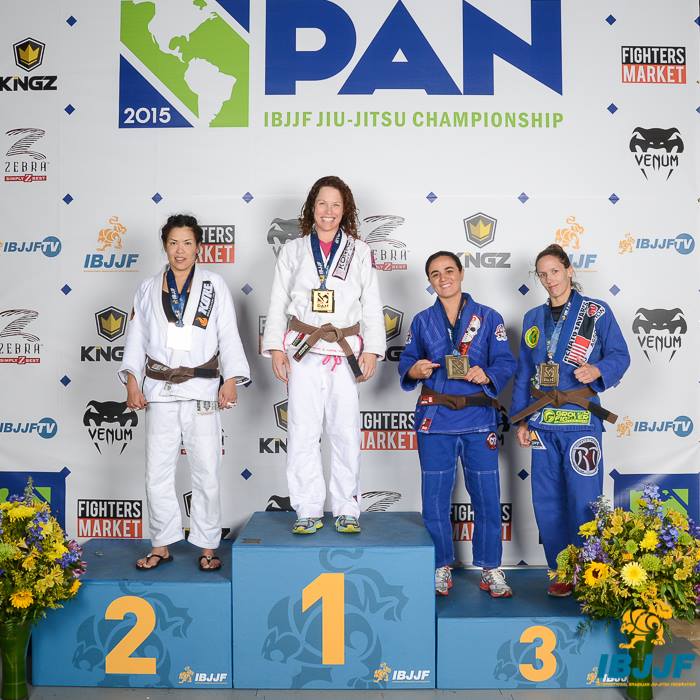 What is Jiu Jitsu

Many of you know that Coach Kristen recently won gold at the 2015 Pan Jiu Jitsu Championship. You may also know that this is one of the biggest tournaments in the world. What many of you don’t know, is what Brazilian Jiu Jitsu consists of.
Many people hear the term Jiu Jitsu and automatically associate it with Karate or other traditional forms of martial arts. Or perhaps people just think it’s that thing they do in the UFC. So, let’s take a moment and clarify how it is different. Let’s start with traditional martial arts, things like Karate and Kung Fu. When you imagine Karate you probably think of katas. Katas are a series of movements, usually punches, kicks and blocks, arranged in a particular order to help students learn to string these movements together. In Kung Fu for example, these movements are usually also intended, in some way, to mimic the movements of a particular animal such as a tiger or crane (think Kung Fu Panda). These can be a lot of fun, but generally speaking, they aren’t very effective in real world situations. The other thing that may come to someone’s mind is the UFC. The Ultimate Fighting Championship has gained many fans over the last several years. Most every fighter in the UFC has at least some Jiu Jitsu training, but it is only one aspect of what goes on in the cage.
So, what is Jiu Jitsu? It can most easily be summarized as ground fighting. It has been said that upwards of 90% of all fights end up with at least one person on the ground. While this number may not have be somewhat inflated, the fact remains that most fights end up there at some point. So what happens when one or both parties end up on the ground? Traditional punches and kicks go all but out the window. This is where Jiu Jitsu comes in. Think of it like wrestling, only meaner. While wrestling relies solely on keeping an opponent down, Jiu Jitsu aims to also subdue that opponent. This means that while on the ground the Jiu Jitsu practitioner will be looking for a way to choke or manipulate his opponent’s joints. In a real life situation, that joint manipulation is intended to cause injury, perhaps just enough to allow you to get away from an attacker. In the gym, these submissions are carefully applied to allow one’s sparring partner to “tap out” or give up.
You may be asking yourself at this moment, “Why would I ever want to practice a sport where my partner is trying to choke me?” As previously stated, while Jiu Jitsu is a very effective self defense tool, it is also a safe sport to practice. The key to being a successful student of Jiu Jitsu is to leave your ego at the door. People most often get injured by not tapping out simply out of a reluctance to “give up”. We learn from our mistakes, but only if we can stick around long enough to do so. At Unlimited Possibilities we take safety one step further. Students are not taught how to finish a submission until they have proven that they can let go when a partner taps and that in turn they can tap out at the appropriate time.
Hopefully, this has shed some light on what it is that we are practicing. If you have any questions, please do not hesitate to contact Coach Kristen. She is always willing to help.